Check out a Virtual Season of Six@Six

Six@Six is an annual series of community lectures by NKU’s faculty and students. The series showcases the scholarship and creative work on campus by discussing that work in the community. Normally hosted at venues around the region, including Behringer-Crawford Museum, the series has moved to a special “mini-series” of Six@Six talks using the magic of Zoom and Facebook. 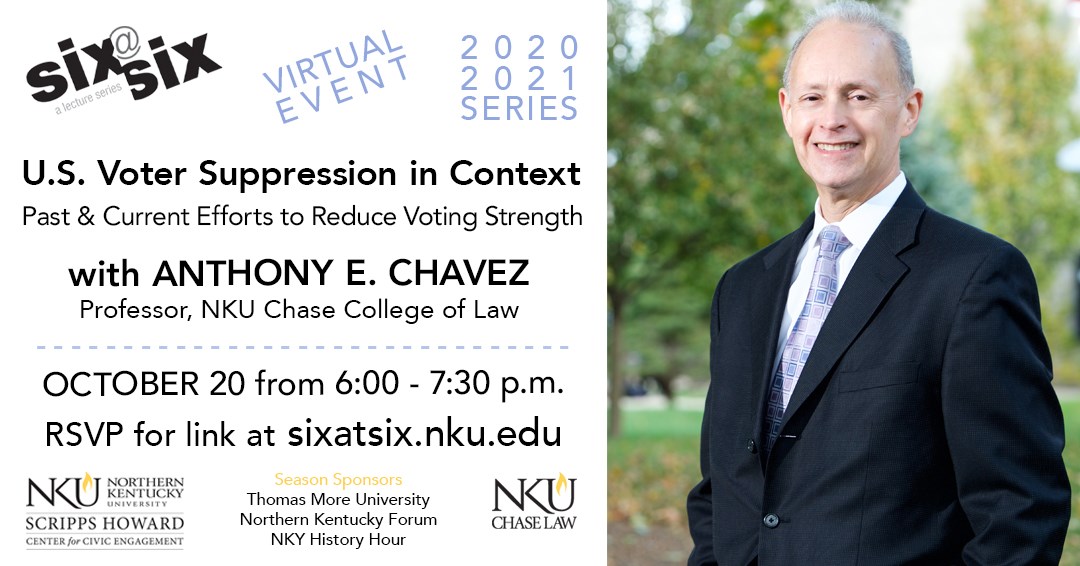 Join us for the virtual season of Six@Six via Zoom. The United States has a long history of policies designed to impact its citizens’ voting strength adversely. Initially, these policies limited the persons who could cast votes. Even after the federal government expanded the franchise, states adopted new means to prevent voting by certain segments of society. The Voting Rights Act of 1965 addressed many of these devices, but new means have arisen. Furthermore, policies that determine voter registration and the times and methods of voting unnecessarily limit voter participation. Examples from several states and other countries suggest changes that could increase voter participation in the United States. A link to join the webinar will be emailed to those who RSVP.

Six@Six Lecture Series is a community lecture series sponsored by Northern Kentucky University’s Scripps Howard Center for Civic Engagement. Think of this as your chance to go to college, minus the tuition, the morning classes and the pressure of grades.

The Scripps Howard Center for Civic Engagement is a department at NKU that works to connect the campus and community. The center’s programming is designed to encourage NKU students and faculty to get involved in the community. Learn more at http://civicengagement.nku.edu.