This event has been postponed and will be rescheduled at a later date.

Announcing the Winners of the 2020 Two-Headed Calf Awards

Drumroll please...Behringer-Crawford Museum has announced the recipients of the 2020 Two-Headed Calf Awards for outstanding service to the community.

The honorees and their award categories are:

Service to the Community: Generosity and Vision: Mary Lou and the late Carroll J. “Mac” Heidrich of Fort Mitchell

Mary Lou and Mac Heidrich, Redwood Trustee Emeritus members, have dedicated decades to volunteer leadership at Redwood Rehabilitation Center. The Heidriches started volunteering in 1960, when their son, Gary, was only two years old. Mac served as one of the first presidents of Redwood's Parent Group. The Gary Heidrich Fund at Redwood was created in honor of their son and serves as a testimony to their commitment to helping children and adults with severe and multiple disabilities achieve independence andreach their highest potential.

Service to Learning: Academic Excellence and Innovation: Cathy Wolff, first-grade teacher at Beechwood Elementary School in Fort Mitchell
Cathy Wolff has been a first-grade teacher at Beechwood Elementary School for more than three decades. Recognized by parents and peers for her caring and innovative procedures, she has used songs, dance, poetry and plays to engage and educate thousands of elementary school students during her career.  She was selected by her fellow teachers to represent her school in receiving the National Blue Ribbon Award in Washington, DC and has twice been a recipient of the Golden Apple Award from the Northern Kentucky Education Council and the Northern Kentucky Chamber of Commerce.

Robert Webster is president of the Kenton County Historical Society and author of several books on Northern Kentucky history, including “Beverly Hills Supper Club: The Untold Story Behind Kentucky’s Worst Tragedy.” He is a frequent contributor to both Northern Kentucky Heritage magazine and to the “Our Rich History” column of the NKy Tribune.He is a three-time recipient of the Kentucky Historical Society’s “Outstanding Publication” Award and is a frequent speaker for civic and community groups throughout the region.

Jack Moreland is a distinguished educator and community leader. A former public school science teacher, principal and superintendent, he served as interim president of Northern Kentucky University and eight years as superintendent of the Covington Independent Schools. He was instrumental in helping to merge the state’s community colleges into the Kentucky Community and Technical College System and served as its interim chancellor. Moreland currently is president of Southbank Partners, Inc., a community and economic development organization that coordinates activity with the cities that lie along Northern Kentucky's bank of the Ohio River, and the Newport Southbank Bridge Company, which operates the Purple People Bridge. He is a trustee emeritus of Behringer-Crawford Museum.

The 2020 Two-Headed Calf award recipients will be honored at an awards dinner and gala at Northern Kentucky University's Votruba Student Union Ballroom. The event will include dinner, cocktails, live music, a silent auction, raffles and free parking, in addition to the fun awards celebration. All-inclusive tickets are $100 per person or $800 for a table of eight.  For reservations, visit: https://e.givesmart.com/events/gdF/ or call 859-491-4003. 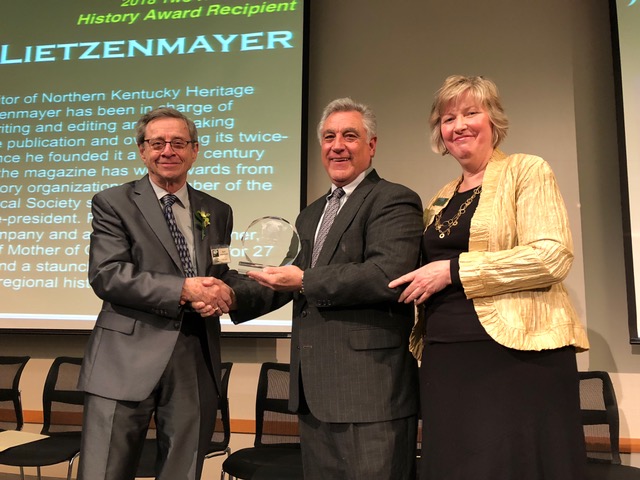 Behringer-Crawford Museum in Devou Park is serious about its mission as “a center for the collection, presentation, study and enjoyment of our natural, cultural, and visual and performing arts heritage” – and serious about its exhibits that capture Northern Kentucky’s story.

But the museum has always had a good sense of fun, too. And perhaps nothing symbolizes that good humor more than the museum’s taxidermic prize, the two-headed calf. So, in the spirit of both serious devotion to the mission of the museum and BCM’s reputation as a fun place to visit, we present our tenth annual “Two-Headed Calf Community Service Awards.”

Typically awards celebrate one exceptional achievement. The fastest runner wins the race. The most talented violinist is awarded the gold medallion. Behringer-Crawford Museum’s Two-Headed Calf Awards recognize that very often, true excellence rests with those who demonstrate achievement beyond a single contribution. Just as two heads are better than one, so, too, is the service of the people these awards honor.

Past Two-Headed Calf Award recipients are:

History - for contributing to the preservation and understanding of our regional and state history.

Education - for demonstrating academic excellence and innovative approaches in history, the arts or archaeology.

The regional history of Northern Kentucky as part of the Ohio Valley must be preserved for the benefit of present and future generations.  Therefore, the Behringer-Crawford Museum is a center for the collection, presentation, study and enjoyment of our natural, cultural, and visual and performing arts heritage.